Dallas-based developer Provident Realty Advisors is prepping a 468-acre tract formerly owned by Fort Worth's Pate family for a $1 billion mixed-use development, which will bring upwards of 1,000 single-family homes to the site along the newly completed Chisholm Trail Parkway. 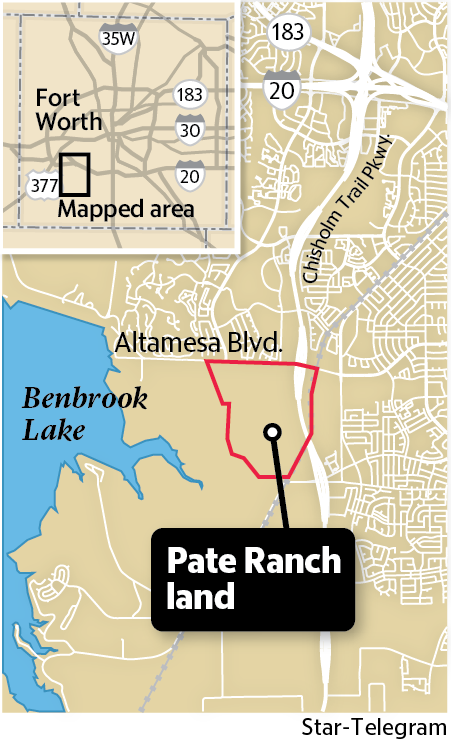 Along with the single-family homes, Provident Realty plans to develop nearly 200,000 square feet of grocery-anchored retail space and a three-story apartment community with about 325 apartment homes on the tract at the southwest quadrant of Altamesa and Bryant Irvin Road in southwest Fort Worth.

"People don't realize the amount of impact the opening of the Chisholm Trail Parkway will have on this whole corridor," CEO Leon Backes told the Dallas Business Journal."This makes this corridor completely accessible and we are immediately able to start a shopping center development and single-family neighborhood."

The $1.4 billion Chisholm Trail Parkway brings this part of Fort Worth from a 30-plus minute drive to downtown Fort Worth to an eight-minute commute to the city's core, he added.

"This has really opened up this area; it's such a game changer for this part of the county," Backes told me.

Provident Realty Advisors has begun planning and designing the layout of the mixed-use development — which is being called Tavolo Park — with plans to put in streets and utilities for the single-family community and start the grocer-anchored shopping center this year.

"Tavolo" is Italian for table, which is a reference to the flat nature of the property's topography.

Construction is expected to begin on the apartments by the end of the year with 150 home lots slated to deliver to builders David Weekley Homes and Highland Homes by the third quarter of 2017.

The three-story apartment buildings are expected to have an urban design with parking behind the buildings, which gives Tavolo Park's apartments a similar feel to those seen in Uptown or other mixed-use developments, said Jay Hawes, vice president of development at Provident Realty and executive overseeing the project.

Backes said the apartment community would be centered around a central green area, amenity center and clubhouse and park and trail system. He said he expects Tavolo Park to take up to eight years to fully develop.

Find Your Next Home!